I lost interest in the two-wheeled transport a few years back when my bike was stolen from behind the Virginia Discovery. I had been up all night helping Aaron install one of his exhibits at the children’s museum, and when I finally left around six in the morning, my turquoise Mongoose, that I had ridden since seventh grade, was gone.

A friend found me a cheap beater bike, which I rode until a few weeks out when the whole gear/pedal/crank mechanism blew apart all over the road. Springs and nuts were literally rolling down the street. I carried the floppy, broken pile back home and ran to work instead.

I was done with bikes. They had broken my rusty crank shaft of a heart and it was time to move on. (I guess that was about the time I started roller skating, but that is a whole other story…)

So, now here we are, a full-on biker family. How did this happen? Well, our two kiddos hit the ground rolling, as it were, with the whole bike thing. We started them off on small bikes and took off the pedals so they could push with their feet and balance fearlessly. (You may have seen those snazzy strider bikes that are essentially the same concept, only they cost as much as a functioning bike and once your kid is ready for pedals they are done with the strider. Lame-ness.) Our boys both asked for their pedals when they were ready, and Pierce was zipping around at age 4 and Judah at 3.

Recently, I happened upon a yellow(!) Specialized at the Salvation Army for $25, and I fell in love all over again. I took the bicycle over to Community Bikes and got Honey tuned up. The volunteers there were superb. She needed a new thingamazoo, which they had and installed. Now she rides as smooth as her namesake.

While we were at Community Bikes, Aaron bought a couple of bike seats- also known as saddles to rip apart. Now, a horse riding saddle-maker by trade, he set out to use his skill and ingenuity to make something fantastic for a bicycle.

To him, the bike saddle conjured images of a manta ray. He researched rays, ordered some eyes from a taxidermy supply company, and came up with a quirky, yet slick piece of equipment. 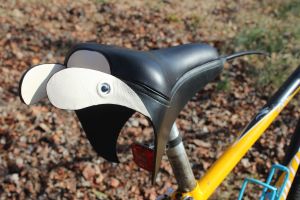 I can’t wait to try it out on our next free-wheelin’ family bike adventure!

I brought two of these wooden, spice-rack-shelving-thingies home from Circa with visions of organized rows of tiny toys marching through my mind. Sure enough, thanks to a salvaged piece of convex-quarter-round-trim-molding (?), several screws and anchors and I had a classy set up for the boys’ exponentially increasing collection of Playmobil guys. 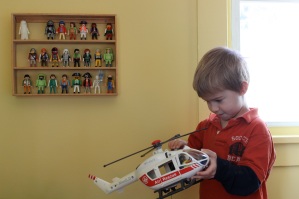 Basically, I leveled the molding, marked it and drilled pilot holes for two screws. I put two plastic anchors in the drywall, double-checked the level, and installed the molding. Next, I hung the shelf so that the inside top edge rested on the open edge of the molding. I slapped on a little wood glue and taped that sucker in place overnight. The next morning, Judah and I lined up the little dudes in their new barracks. Remarkably, the boys enjoy the display enough to put their toys back in place at the end of play time.

Tip o’ the week: If kids know where items belong, they will put them there with very little resistance and/or assistance. (Bonus if your storage system looks rad.)