I am an aggressive girl. Ever since I was a child, I have tapped into an electrical current of bite and gnash. Imaginary games involved slaying Minotaurs with bows and arrows, rescuing drowning princes and frozen kings. Wild horses were tamed and ridden up into tree tops and through creek beds. My face violently slick with mud and ash, I was ready to take on any tribe, any army, any beast.

But time after time, I met my surprising ruin in encounters with other women.

My closest friends have consistently been boys, men, male. My closest, inconsistent companions have been girls, women. Why is it that the befriended women in my life have been so historically disappointing? Is it my own expectations of what friendship truly entails that have set me up for failure? Perhaps, it is the aggressive nature of my energy and action that keeps women from staying close. Maybe it is my own desire for intimate, honest relationships that frighten would-be sisters away like so many rabbits in a field.

I played roller derby for three years. My youngest son was 6 months old when I showed up for my first “fresh meat” practice. I picked up the skating skills quickly, likely because of my background in ice hockey, in-line college adventures in New York City, and late 80’s passion for quads. But I was also motivated to be a part of this community of outsiders.

At an early age, I experienced how rich life could be when surrounded by those who are different from you. As I grew into adulthood, the friendships that I sought pushed me outside of any perceived comfort zone into unfamiliar territory of sound, smell, taste and color. Some of my dearest friends to this day were met in places where I was so clearly either unwelcome or out of place that people stared, glared or did their best to ignore me.

My first roller derby practice was similar. Sure, a few ladies smiled. One seemed ecstatic about a potential new skater (I would later see this same woman brought to tears repeatedly throughout her time with the team). Mostly, I was met with silent sideways looks. It didn’t bother me. I spent four years at an all girls’ school during the charming and sweet years of seventh through tenth grade- I was familiar with the judging gaze of young women.

But derby seemed different than junior high. Of course these women were withdrawn, hesitant about a new-comer! They were used to being judged, used to occupying the fringe. A rainbow of hair color, storm clouds of tattoos covered bodies that seemed to testify to the true diversity of the game. That first display was splendid.

Then there was the game of derby: A beautiful symbiosis of violence and dance, of communal effort and individual skill. I jumped off of the cliff’s edge of motherhood, marriage, work, cultural normalcy back into the frigid waters of blissful subversion. Roller derby soaked my life, in what I thought was the best way. But like any time spent in the cold waters of snow melt: what was at first refreshing quickly becomes dangerous. 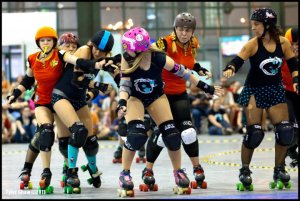 At my first bout, one of our star players seriously injured her shoulder. Over the course of the next several years, she would undergo two surgeries and rack up thousands in debt. She wasn’t the only one… Derby is unforgiving.

I became a coach in my second season with the team. I felt close to the source of empowerment that was at the heart of our organization’s mission. Eager to influence the expansion of our collective goal, I set out to lead under an inclusive banner. Even as I worked with my teammates to develop a greater sense of community, I witnessed strife upon strife. I began to hear the whispered talk, the swirling gossip, the criticism insensitively voiced. I spent hours in meetings building, forming, honing just to be met with late night calls and emails declaring isolation. Often I found myself in the center of the critique, in the intersection of clashing personalities. My kids were feeling my anger and hurt. My husband was witnessing the decay creeping into my hope for my place amongst these women. I resigned my leadership role.

I kept skating. I kept knocking girls down. My husband joined me in co-ed bouts that we had been invited to. I knocked boys down. It was awesome. 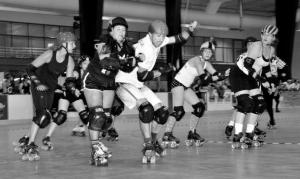 My body was starting to show signs of wear. I spent a few months secretly wrapping my ankle before practices and bouts so that my teammates wouldn’t worry. I continued to be a voice of positivity and I didn’t want my own pain to distract. Bones and muscles often speak louder than any pep-talk, however. I spent some time trying to heal. I got better equipment. I rested. I felt like I was letting people down.

Meanwhile, ankles and arms were snapping like so many branches on a dead tree. Girls were getting hurt constantly. We focused on strength training to protect our bodies. We worked on evading those nasty hits meant to harm. And in the middle of all of the physical brutality, the apologies seemed to stop. The division that I had seen quietly and privately expressed was bleeding out onto the track.

Still, new skaters kept coming. The team kept winning. Our bouts were packed with fans. Friendships were forming and sticking. So much was right and good! 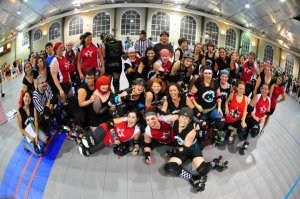 But not with me. Many of my trusted compatriots left the team, pushed out feeling unappreciated and burnt out. Some stuck with the team even though it wasn’t fun or life-giving anymore. My own friendships had come undone. My best friend (and former derby wife) on the team stopped talking to me. Nine months later she finally told me why. My big “sister” and I had to go to mediation to resolve our differences. I miss those women and the friendships I hoped we would have long after our derby days were done.

And that’s the thing about derby- it ends. Your body can’t sustain that level of abuse for decades. Skating counter-clockwise day in and day out alone, will wreck havoc on your equilibrium. Throw in a couple cracked ribs, deep bruising and a misaligned spine every few weeks and you’ve got a recipe for suffering well past the season’s last bout.

Is derby worth the risk? For some the answer is a resounding yes! For the women who swear that derby saved their soul, there is no substitute. For the women who finally found their family among the misfits on the track, this is home. For the men and women who know that they are a part of something powerful, satisfying and rich, then of course they’ll take the injury along with the healing.

For me, I did take the risk and I made it through with minimal medical bills, an intact marriage and a lot of great stories. But when I think back on my time with my derby girls, I feel sorrow. The loss of mutually supportive friendship, the broken promise of an interdependent community and the dissolution of the idea of belonging leaves me melancholic.

When I finally informed the team of my departure after 3 years, only two people contacted me in the months following. There were over 80 people on the team when I left. I had served as coach, captain and teammate. Yet, when I run into my former teammates in this small town, we greet each other with genuine warmth. There is a shared experience that derby offers, even if the demonstration is fickle, non-committal and often reserved- just like a woman, just like me. Maybe that is the truth that underlies my high-hopes and bastard expectations: the nature of women is that we change, we are slippery and sharp, we will not be what is pre-supposed.

I am discovering a renewed hope in my relationships with women. Now that I have more time and emotional energy to invest, I am finding that I have had steadfast sisters all along. 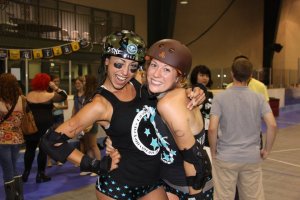 But the bruise that derby has left on my heart remains. 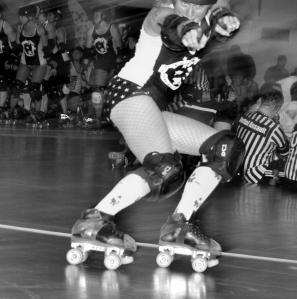 Best name for a tanning salon: Color Me Badd. In Detroit. In the nineties. When I went back to take a picture of this magical gift of culture and signage, it was nowhere to be found. I swear, it was real. (This was before the true coming-of-age of the interwebs, mind you.)

Today was a colorful day, and not always in the best sense. My son contributed some colorful behavior: slamming doors, yelling, crying, etc. And I offered some colorful language, out of earshot of aforementioned kid, barely. Once that was resolved and Thing 1 was off to kindergarten, I made rainbow popsicles with Thing 2.

We used orange juice, ’cause it’s what we had, added some Elderflower syrup, dropped in some food coloring, and poured it all in the amazing Zoku pop maker. 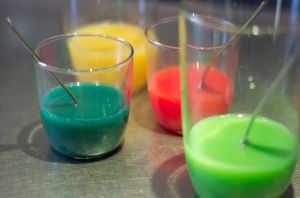 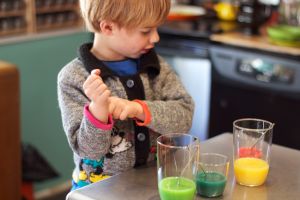 “The colors match my sweater!” 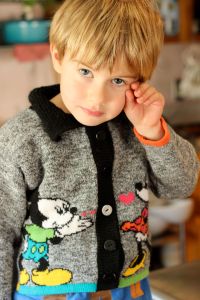 It was a great lesson in color mixing and a decent lesson in patience. While we waited for each color layer to freeze, Judah and I played Chinese checkers for added flair (It was his idea that we each use two colors of marbles). 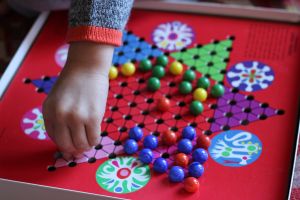 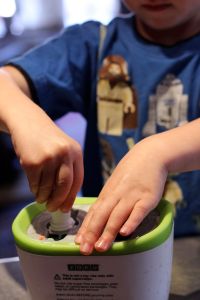 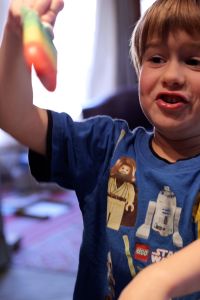 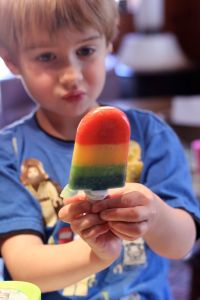 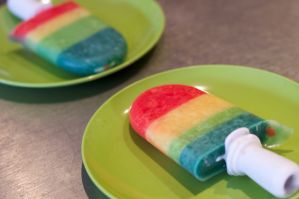 As a child I remember walking along the rocky shore of Martha’s Vineyard feeling the ocean-smoothed stones warm and roll my feet. Like exotic birds’ eggs washed ashore, each was a treasure, alive with possibility.

I still feel this way about certain stones- their vibrancy of being.

In Virginia, we are closer to rivers than to oceans and we still discover amazing rocks. Unearthed, churned and placed just so on the green edges of watery arteries.

Promise Stones have a ring of contrasting material that course across a rock like a wedding band. My mother showed me my first Promise Stone on that island shore of my childhood. My husband and I have collected these stones here and there on our travels and have embedded several in the floor of our bathroom. Some from Martha’s Vineyard, where we were married. Some from the river down the road. And some from places in between… 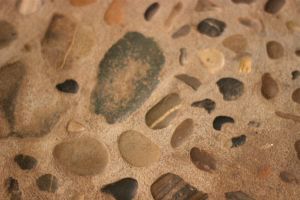 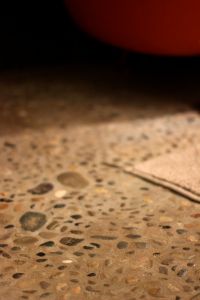 Remarkably, it seems that when I am most questioning presence, they turn up on curb-sides and in fields.

Last weekend, I found myself asking for a reminder.

This is a difficult time of year and changes are swirling like the froth of rapids. We took a family excursion to Sugar Hollow, a beautiful stretch of land and water in the national park. The boys each brought a Playmobil boat to send down the river where dad was waiting to fish them out of the freezing rush. I stole away for a short time and came across scattered Promise Stones.  Strong, solid stripes of quartz wrapped around the rocks like tendons or ribbons on a gift.

It may sound sentimental and superstitious, my fondness for Promise Stones. But that’s okay. I’d like to wonder at nature and my place in it. Even if it means seeing love in a rock. 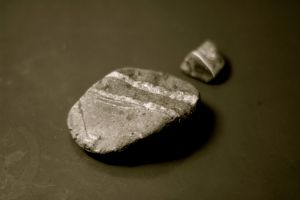 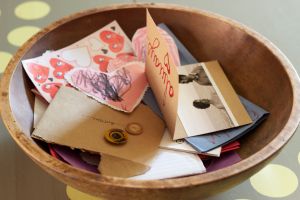 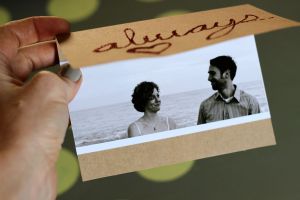 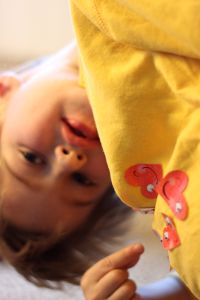