I’ve seen the green shoots in the garden that no one wanted. The snow keeps smothering and then melting just to smother again- like the covering grief. We are not sure whether to welcome the newness of the transitory precipitation of sadness or whether to nestle in and pray for thaw. Still, the garden is growing. The promise of blooms keep us waiting despite the cold.

A few months ago, our community quaked with the loss of a young citizen, friend, and daughter. Charlotte was six years old when she was struck and killed by a truck on a quiet city street in the middle of the day. I didn’t get the news until the evening- a friend phoned while I was painting at my shop. Alone, my response was one of fury, of rage. I screamed. I roared into the absurd night. And then I gathered courage and sought out shared tears.

Charlotte was one of the children in our little “yurt school” cooperative. Full of fire and glitter, she burst into every space, romanced every flower, and choreographed the wind. She danced with abandon, shared with gusto, and stood her ground like an oak sapling.

How do you explain the death of a child to a child?

The next morning, with mussed hair and sloppy pajamas, we sat with our boys. I slowly and quietly explained to them that our friend Charlotte had been in an accident and that she was taken to the hospital and that she had died. I watched my five year-old’s eyes change as the words clicked into place, their meaning contracting and expanding the muscles in his small face. This was the most frightening moment: The realization that I would never fully know what mechanisms were at work, what cogs were turning and what internal parts of him had just transformed. Again, I was angry and fearful. What has changed in my son? Is there a stony crust formed somewhere deep in the recesses of his trusting heart? Has the muscle of his love for others grown stronger? Is the acid of this senseless loss bleeding into his veins? There was no way to know. The line of distinction between the person-hood of mother and child revealed its rich ink.

We raise our children to let them go. Each milestone becomes a landmark on a course of departure. But we all carry the hope, maybe even conviction, that the route circles back, that somehow our sons and daughters are on a ship riding the tide that ebbs, flows and returns.

So when our faith returns an empty ocean, a broken vessel, then what?

Our perceptions are always changing. Our gratitude, sustaining. And still we search for what is beyond our vision, beyond our understanding. We linger on the hopeful shore: mothers, daughters, fathers, sons, sisters and brothers. And we fill the tides with our tears and change the course of ships with the moon of our love.

No one wanted to plant Charlotte’s Remembering Garden- we didn’t want to have to re-member, we wanted the moment to be alive in her presence. Over one thousand bulbs went into the cold earth on a rainy morning. Hands caked with mud massaged them into the soil. And now we wait for spring, trusting that the season will change and bring her joy to us again, again.

If you would like to hear more about our experience of how we’ve walked with our children and community through this tragedy, please feel free to be in touch. Leave a comment or send me an email trouble.trace@gmail.com.

Today was my son, Pierce Trouble’s 6th birthday. He’s an awesome kid. This was his first ‘real’ birthday party and he is old enough to have some opinions on how it all shakes down.

So, one night a few weeks ago, we had a family brainstorming session to plan the upcoming festivities. The chalkboard wall in our kitchen/dining area was covered in drawings of X-Wings and a very elaborate Death Star.

We celebrated the Star Wars-themed event at a local park. We made spaceships out of cardboard boxes, pool noodles, duct tape, straws and streamers. We ate pizza and veggies. And then the young Jedis destroyed the Death Star pinata- with gusto. When finally the looming sphere broke apart, it ripped in half, the bottom dropping out. The kids pounced on the candy, tattoos and granola bars and then did an amazing job of sharing with each other so that everyone left smiling. Or maybe the smiling was just evidence of the sugar doing it’s thing… Any which way, it was a blast. 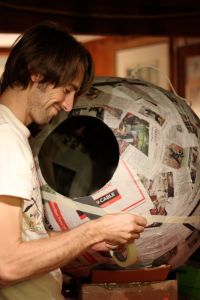 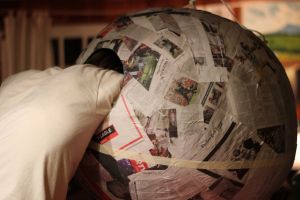 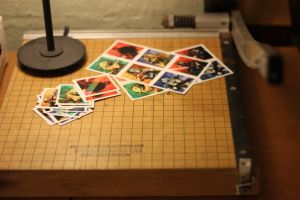 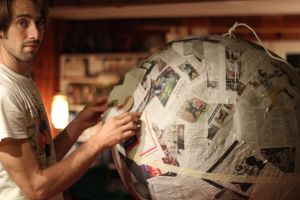 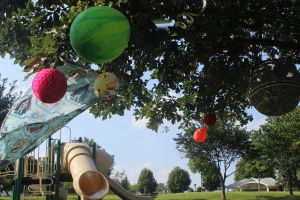 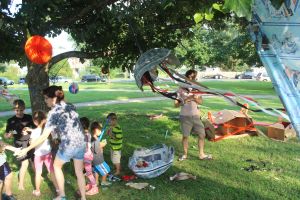 How to make a ginormous Death Star pinata:

1. Buy the Sunday New York Times. Read it and then save it- you will need every page. Perhaps, even the magazine…

2. Make papier mache by mixing 1 cup of rice flour with about as much water. Whisk out the lumps. Boil 4 cups of water and 1 tablespoon of salt. Add the flour mixture and boil for 3-5 minutes, stirring frequently. Let it cool and get ready for the glop-mess.

3. Blow up your big-ass beach ball.

4. Put down a drop cloth, tarp or do this whole thing outside (especially if your doorways are narrow- you won’t be able to get the Death Star out of your house…)

5. Place the ball on an open box to keep it stable while you work.

6. Begin glop-mess. Spread rice goo on large pieces of newspaper, tear as needed. I used a chip brush and Aaron used a silicone basting brush when the goo was too hot to spread with our hands. By the way, it smells nice- like fresh sushi and Korean grandmothers. Ahhh, so lovely.

7. Build up no more than three to four layers then carefully rotate the whole thing and repeat across the whole ball.(Once it is dry you can add more layers if you have some weak spots.)

8. Wash your hands, take a shower- call it a night. Use a fan/heater/dehumidifier to help aid the drying time. Drying takes a looong time. Like, 24-48 hours. By the way, thick goo dries faster than runny goo.

9. Cut a circle for your Death Star concave-eye-thing. Find the valve of the beach ball (it may still be sticking out) and use that as the center of your circle. Deflate the beach ball so you don’t cut into it, if you want to save it. Carefully cut this out with a box cutter or x-acto. Deflate the ball some more and pull it out. The goo doesn’t stick to the vinyl- it should come out pretty easily.

10. “Fill” your pinata. I use “” because it is unrealistic to actually put that much stuff in a giant Death Star unless it is old t-shirts or marshmallows or balloons. We put goodies in individual paper bags, slit the backs and taped them to the interior walls to better distribute the weight. For extra effect, Aaron put some Dark-Side themed streamers inside, taped to the top. You can see from the pictures that when it was all smashed the streamers added some serious je ne sais quoi. Space jellyfish?

11. Once dry, paint that sucker. We used leftover primer in grey and white. The center band/equator is electrical tape. I looked at some pictures online but ended up just painting loosely geometric grids of grey and white rectangles. Then Aaron and I added some white lines and bright white dots/lights.

12. Seal her up. Flip that circle piece around and hot glue in place.

13. At some point attach a loop to the top. I missed this part because I was at work and Aaron was home with the boys apparently playing with blades and rope…

14. Figure out how to transport the thing to your party. Aaron walked it to the park- it wouldn’t fit in the car and we live only a few blocks away.

15. Bust it open! For our party, I gathered the rebel army and they each took turns beating it with their light sabers. Everyone got a turn (several whacks- no blindfold) and the birthday boy split it open. Then mayhem ensued- in a good way.

If you have any questions, leave me a comment and I’d be happy to respond.