What exactly are “common sense” solutions?

The problem is not obvious. The break is not clean. The parts are no longer available. We can’t fix what we do not understand, what we are ill-equipped to repair.

Ten years ago, my dad called me to tell me that my mom had died. It was a cold February night in Brooklyn. “Is Aaron there?” My dad asked. He wasn’t. “Do you know where to find him?” Yes, what is this about? “Are you sitting down? You need to sit down… Christy, your mom is dead.”

I can feel my heart racing even now. I can hear the world become muffled by a blanket of that falling moment. And then the blanket lifted. Sounds became sharp, piercing. Color radiated and hummed. Texture vibrated. I felt peace and energy and unremitting comfort. This is so good, I told my dad through tears. She is free of the limitations of this world. The brokenness, the despair, the relentless hoping, the unseen faith of waiting and struggle and perseverance. We prayed together, voicing our gratitude for her shared life.

And then I ran.

I ran like one runs in dreams- with the swiftness of purpose, without noticing my breath.

I found Aaron, my then fiancé, in class. He gathered our things, he gathered me, and we drove through the vivid night.

The cause of death was unclear. She had been home alone, reading on the back porch (Her Bible was open to Isaiah 61, amazingly.). She had walked my sister to school that morning, spoken with my dad at several points throughout the day. Nothing had seemed out of place. She was healthy, sound. But when my sister came home and found her lying on the floor, she knew something was wrong. Caroline hid in her room until, not five minutes later, a friend called to speak with my mom. Caroline explained that she couldn’t wake her up and that she had some blue spots on her face. The friend immediately called 911 and came to get Caroline, who was 8 at the time. My dad received the call a short while later from the police and came home with a friend. “She looked cute.” He told me later when I asked if she looked like she had suffered in those final moments. “She looked cute.”The house was treated like a crime scene. Forensic officers were dusting for prints, checking for evidence, looking for pieces. Nothing.

My mom’s body was taken to UVA Hospital for an autopsy. My dad picked up my sister. And then called me.

One week later, there still were no answers. My mom’s body was sent to Richmond for a second autopsy. We were told it would be at least a month before we would be given any  indication as to what shut her body down.

And this was an immense and beautiful blessing.

We had been dropped into an ocean of grief, of loss, of confusion but there was no memory of blame, no point of origin. We were here, in this moment, breathing, floating. The ‘why’s’ and ‘what if’s’ were harbored elsewhere, along with their distracting, false hope of rescue. Instead, rafts, life boats of friends and family sailed to us and we bobbed along together.

Eventually, a medical “explanation” was afforded us. But it was superfluous. Basically, it confirmed what we already knew: this was unavoidable and it is final. This we all know. This is our shared knowledge- our common nonsense.

So, loose the weak thread of comfort that we seek in reason. Un-knot the net of tidy solutions. Release our captive souls and those we hold prisoner with our tear-blurred judgement.

Even in the distorted face of a killer, there is the knowledge of pain, the lie of being alone, and the hope for satisfaction. As ugly and horrific and terrifying as it is, we share this pain, these lies and this hope. It permeates our collective, finite humanity. And yet…

Death itself is dying. Decay is submitting to life. Isolation is fading into community. The shredded cords, the frayed ties, our broken heart-strings are woven into the warp and weft of peace. 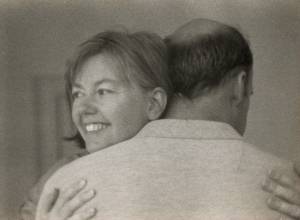