He looked defeated as he stepped heavily down the bus stairs. It was as if the big yellow box exhaled my five-year-old son onto the gravel. And there he stopped. He didn’t want to walk towards home and he certainly didn’t want to turn around and hoist himself back into the heaving bus.
His eyes were a little pinkish around the edges and his kindgartener-sized back pack slumped around his shoulders.
“How was school?” I asked the tried and true mom question.
“I don’t know,” Pierce responded like the mini-teenager he has become.
“Please walk with me- I’m cold and want to get home.”
He wouldn’t move, his blinking reptile shoes rooted in the grey dust and chilly air.
Finally, after many halting steps, I picked him up and carried him home. He kicked and pushed the whole way, but every time I gave him another chance to walk he seized up, overcome by his will to be immobilized.
Frustrated now, I plopped him in his room and gave him some “settle down” time.
Ten minutes later, his cries changed from angry vocal pushes to lonesome whimpers and I recognized myself, the child that I continue to be. So I held my son, held myself, and listened.
His day had been difficult. There was an incident at lunch when his curiosity led to unintended and challenging consequences. He made a mess of things and then cleaned it up, ashamed and confused. Fear had entered the equation after the equal sign. Somehow the sums and differences balanced out but he wasn’t sure how. “I don’t want to tell you,” he managed, ” I don’t think you will like it.”
“Maybe not, but I will always love you. No matter what your choices.”
Finally, fretfully, and with the gentle, innocent prodding of his little brother, he described the ordeal and named his part.
I watched the fear rush out of him, exhaling much like the pneumatic bus doors. Fear, shame slimed with tears and snot, my son found himself, again, walking on solid ground.
This morning when I walked with him into his school, he was ambushed by two girls. On the left, the one whose lunch he had knocked on the floor yesterday. “Pierce!” She exclaimed with a broad smile. Two pink backpacks jostled towards him. Two puffball pony tails bobbed with the dance steps of four running feet. And my son, my broken boy, was covered, surrounded by the loving arms of forgiveness and joy and my own child-heart was whole again. 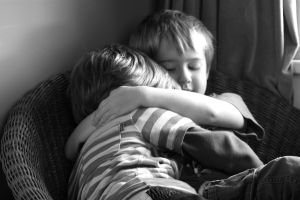 In this dark season of waiting, may you find the solace and comfort of humble joy, fierce love and courage in community.