I love Halloween. Not so much the scary stuff or the candy, more so the community of play that seems to spontaneously erupt from neighborhood sidewalks and city streets.

When I was living in NYC, I made a point to jump in the Village Halloween Parade, annually. One year, after the parade had ended, I was in a late-night dive around St. Mark’s when I was barraged by two wildly gesturing young men. “You are my hero. I loved you so much… And here you are!” One of the guys then proceeded to kiss my cheek. When he pulled back to face me, I could see that he was crying.

I was dressed as Rainbow Brite.

The crazy thing was, he wasn’t the only one. All along the parade route, young mothers, college kids and even some teenagers, emphatically shouted at me. Well, at Rainbow. They were so shockingly and honestly emotional, the representation of this character all of a sudden took on some serious responsibility. It was time to smile, wave and throw more Starburst.

Growing up in Trenton, New Jersey, my dad would set up these elaborate and totally geeky A.V. Halloween spectacles. Once, there was a pumpkin-headed man that would talk to folks coming in for candy (Yes, you had to come inside the house for candy). My dad was hiding behind a partition and was doing the whole man-behind-the-curtain routine: speaking into a mic and lights would flash and whatnot. It wasn’t meant to be scary, just inventive, conversational even. Kids left screaming, some didn’t even bother with the candy.

The following year, dad dressed up like- who else- Jesus. He got some of the same reactions, crying and whatnot, that I did as Rainbow Brite years later. And strangely, (although it was the 80’s, who can say what was strange) the following year dad stayed home and I went trick-or-treating chaperoned by our visiting family friend who was dressed as “an abusive, fat, alcoholic”. The irony was completely lost on our working-class neighbors.

Regardless the get-up, I have always reveled in this shared night of bizarre behaviour and playful interchange. Unexpected things always happen.

When my youngest kiddo was only a week old we dressed up as a family of chickens and got out into the fray. My newborn chick stayed tucked in his sling while his dad and brother flapped their wings at wizards and monsters.

We’ve represented characters from The Cat in the Hat, Where’s Waldo and most recently all of the Teenage Mutant Ninja Turtles.

We are that family. And I hope we will be for a long time… 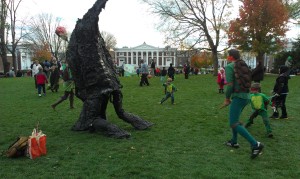 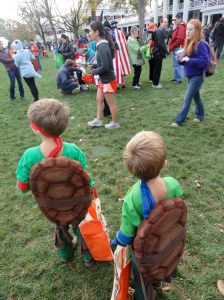